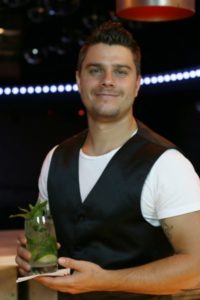 Kevin Gibbons was was born in Derby, England in 1984. In 2002, at the age of 18 Kevin started his bartending career. Kevin worked at a local cocktail bar and began his knowledge in bartending, mixology and flair. For years Kevin worked in restaurants, bars and nightclubs around England earning money to support my education in Sports Science and performing arts.

After graduating from Brunel college, Kevin wanted to take his stage career to the bar scene. In 2005, Kevin moved to Spain to work for one of the most famous bars across the Costa Blanca, Champagne Bar, where he expanded his knowledge on the bar, learned advanced methods and techniques in mixology, flair, and mastered the psychology of bartending.

In 2007 Kevin became the head Bartender of Champagne bar and developed his reputation for phenomenal service, management and created the most intense bar training that the Costa Blanca had ever seen. In 2010 Kevin was offered a position as managing partner at Elite Bartending School Miami and made his move to the star spangled banner. In 2012 Kevin published a Flair manual and DVD along side Austin Gagnon, the CEO of Elite Bartending School, which can now be purchased at one of the biggest online bar suppliers in the world, BarProducts.com.

Now well known for his crazy concoctions, Kevin wows his guests with great bottle tricks and satisfies them with fantastic mixology skills, across the world. Kevin has worked with companies such as Bacardi, Myers Rum and Absolute Vodka across the globe, traveling from places such as New York, Jamaica and even Antigua, demonstrating and educating people in product Knowledge, mixology and flair. In 2015 Kevin became the social media face of Malibu Rum filming commercials that received millions of likes, shares and comments. With over 14 years experience of working in and managing bars, creating cocktail menus, assisting in opening new locations, and teaching, Kevin now brings his education and global knowledge on mixology to Orlando, Florida. 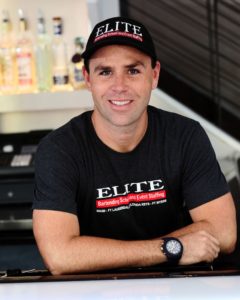 Austin Gagnon started his bartending venture in Upstate New York in the spring of 2001. He was trained by a well-known bar owner in a local fast bar in Troy, New York. After completing two years of college and receiving an Associate Degree in Physical Education from HVCC, Austin decided to transfer and finish out his remaining years of college in beautiful Miami, Florida. While attending Barry University in Miami Shores, Austin put himself through college working in some of the most popular bars in South Florida including Bed, Club Deep, The Fifth, Revolution Live, The Social Lubricant in the Wynwood District in Miami, and the world famous Clevelander Hotel on Ocean Drive where he worked as a bartender for 7 years. Austin has also worked and is currently responsible for staffing many sporting events, concerts, and Venues such as bartender staffing for both the University of Miami and Miami Dolphins football teams, the Miami Marlins, the Miami Heat (2011, 2012,2013, 2014,2015) the world renowned Ultra Music Festival (2009, 2010, 2011, 2012, 2013, 2014,2015), South Beach Seafood Festival (2013,2014,2015) Miami Fine Chocolate and Food Show (2013,2014. 2015) Calle Ocho (2010,2011,2012), and NFL Tailgate parties for the Pro Bowl and Super Bowl. Austin graduated from Barry University in 2006, receiving a Bachelors of Science in Psychology. It was at this time that the idea of establishing an Elite Bartending School in a league of it’s own started to take shape. Austin wanted to share the knowledge, experiences, and skills that he learned in the bar business over the years with others. In 2009 Elite Bartending School’s first location opened in Miami Beach and fast became the #1 Bartending School in South Florida. Austin takes pride in providing his students with an exceptional education and learning experience to help them in their pursuit to become a successful bartender and excel in mixology and customer satisfaction. 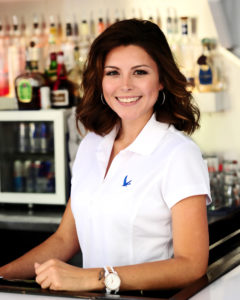 Miranda Schmidt grew up in Niagara Falls, New York. After High School Miranda attended College and in 2011 received her Degree in Health and Wellness from Niagara Community College. Miranda quickly landed a job after college helping others in a nursing home as a Kitchen Supervisor. During this time Miranda also pursued her other lifelong passion of cheerleading and coaching, making the professional roster for the 2011-2012 Buffalo Jills Cheerleading Squad. After cheering for the Buffalo Bills for one season, Miranda decided to hang up her pom poms and head South to beautiful Miami Beach, Florida. Miranda’s love of health and wellness, cooking, and being around people quickly led her down the path to Hospitality. In late 2012 within days of moving to Miami Beach she attended Elite Bartending School, where she exceled in her new craft. Miranda thrived in the program, graduating top of her class, and as one of Elite Bartending Schools best students ever. Miranda quickly landing a high volume bartending job within days of graduating at the famous Automatic Slims. Miranda worked there for over a year, building up her skills and speed behind the bar. After mastering high volume, Miranda was curious to expand her knowledge on Mixology and customer service. Venturing out into the hospitality Mecca that is Miami Beach she fulfilled her next goal by getting hired at the Prestigious Living Room Lounge inside the W Hotel South Beach, serving craft cocktails to Miami’s Elite and Rich and Famous. During this time Miranda also picked up many events for Elite Bartending School, quickly becoming their head bartender for all major events in South Florida. Miranda continues to work many events all over South Florida staffed exclusively by Elite Bartending School, such as the world famous Ultra Music Festival (2014,2015) Fantasy Fest Key West (2014,2015) South Beach Seafood Festival (2014,2015) Cadillac Golf Championship at Triumph National Miami (2014,2015) to name a few. In 2014 Miranda joined the Elite Bartending School’s team of educators, and has since taught and prepared hundreds of todays students for the world of bartending. Miranda’s passion for education, teaching and her continued love of bartending stays with her students long after they come through the course. 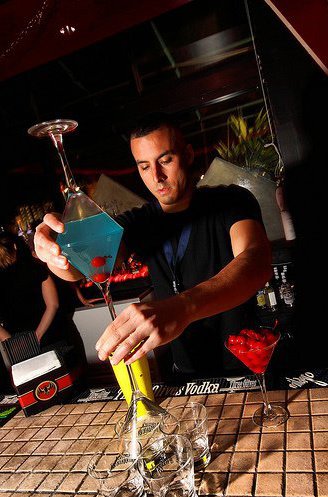 Chad Tocco was born and raised in Las Vegas, Nevada. Chad moved to Miami in early 2001 and stepped foot into the Bartending world, working his first bar shift at the age of 19 at The Allstar Cafe on Ocean Drive, South Beach. Chad’s main draw and passion for bartending is and continues to be Working Flair and Mixology. For 13 years Chad has poured drinks at some of the most popular venues on the East Coast of Florida from West Palm Beach to South Beach, dazzling his patrons with fancy bottle tricks, fire acts, and great cocktails. Chad is a professional Flair competitive bartender and has placed in the top three in over 30 flair competitions with several wins under his belt. In Spring 2012 Chad becomes overall points champion at the World Renowned Bartenders Bash Series beating out competitors from all over the US.

Chad was currently feachured on MTVs Amazingness, showing off his Flair skills to the world. Chad tends bar at Treehouse and Q Lounge in South Beach among other expert flair bartenders, putting on nightly fire shows and constant entertainment. Chad’s passion for bartending translates to how he teaches his students, inspiring them to become the best bartenders they can be.